I was at the Express-Redbirds game last night. They announced that tonight's game would be Military Appreciation Night at The Dell Diamond. Here's all it entails: 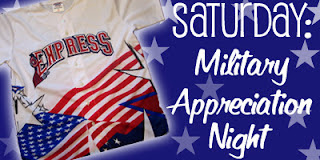 The Express starter, Philip Barzilla, pitched a complete game, giving up only 6 hits and 1 run, earning himself the win tonight, with the Express over the Sounds 6-1.

As for Military Appreciation Night, in addition to wearing the special jerseys and collecting donations to go into care packages to send to the troops, they also had two big "Thank You Troops" banners out on tables with Sharpie pens so fans could write messages of support. The banners will be sent somewhere overseas. Like was done on Memorial Day, all military veterans, active duty or retired, were asked to stand to be recognized. During the 7th inning stretch, instead of Take Me Out to the Ballgame and The Cotton-eyed Joe, we got God Bless America and You're a Grand Old Flag.

Once the autographed, game-worn jerseys are up for auction on eBay, I'll try to track them down and add the links to them here.

Link to list of all jerseys up for auction (will work on listing individual jerseys as time permits...)

I bethcha the retarded peacenik morons hated this.