As I mentioned on Monday, I've found some creative ways to contribute to the fundraiser this year, since funds are a little tight, as I'm sure they are for lots of folks. Not having extra cash doesn't have to stop us, though, from helping out a good cause.

I spend a fair amount of time out at the ballpark during the season. The Round Rock Express are pretty good about showing support for our military. This past season, I contacted them about their Military Appreciation Night game, and they allowed Soldiers' Angels to set up a table, and we got a pretty prime location, right behind Section 119, directly behind home plate (and in the SHADE!). So, when I got an idea for an item for this year's Valour-IT fundraiser, I made contact with the Express. Nolan Ryan is one of the principal owner. I was given the contact information for Mr. Ryan's assistant in Round Rock.

My idea? Well, I make those fleece tie blankets. In shopping for fleece, I've seen the MLB licensed prints. The Express are the Astros' Triple-A affiliate, but the licensed fleece isn't the current color scheme for the team, and I don't really like it. However, Nolan Ryan - in addition to having been an Astros during his baseball career - was a Texas Ranger and is currently the President of that ball club. The licensed Rangers fleece was perfect: the same good ol' red, white & blue. So, I bought the fleece, made the blanket, then made my proposal to Mr. Ryan's assistant. I hoped to have the 2009 Texas Rangers autograph it so it could then be auctioned off in support of Soldiers' Angels Project Valour-IT.

Mr. Ryan's assistant passed my request along to the appropriate person with the Rangers organization. Unfortunately, the answer turned out to be a polite "No". Seems they get hundreds of these types of requests... However, there was a counteroffer. If I was interested, I could send the blanket and Nolan Ryan would sign it. Of course, I accepted. I made arrangements to deliver the blanket to the office in Round Rock. I had a lovely chat with Mr. Ryan's assistant. Turns out, her husband was in the Marine Corps, and is a Vietnam vet. In chatting with her, she said they could probably also provide an autographed baseball and photograph. Maybe we could make a "Nolan Ryan package".

Well, folks with more experience with auctions than me recommended not making it a package deal, so we have three separate Nolan Ryan items up for auction in support of Project Valour-IT: 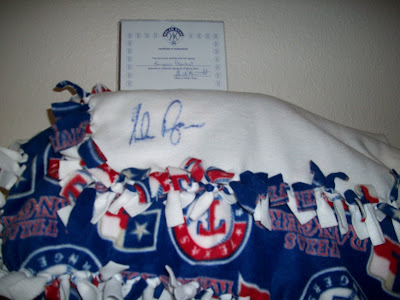 A one-of-a-kind Texas Rangers licensed fleece tie blanket, autographed by Nolan Ryan, comes with a Certificate of Authenticity from the Office of Nolan Ryan. 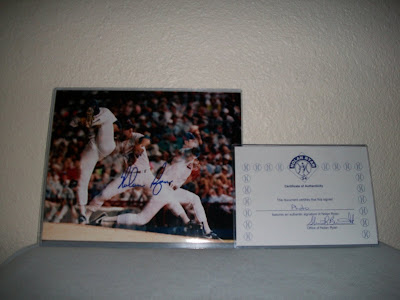 An autographed photo of Nolan Ryan as a Texas Ranger, comes with a Certificate of Authenticity from the Office of Nolan Ryan. 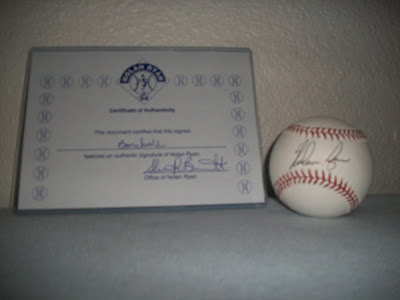 A Nolan Ryan autographed Official Major League Baseball, comes with a Certificate of Authenticity from the Office of Nolan Ryan.

These aren't the only items I've donated for auction, but the others aren't up yet. Others have also generously donated items for auction, as well. The Valour-IT auction items can be found on eBay, go check them out. As I said, not everything donated is up on eBay yet, so if you don't see something you like, keep checking back. And, if the auction items just aren't your thing, but you still want to contribute to providing laptops and other adaptive technology to our severely wounded Warriors, you can always click that donation button in the upper right-hand corner of the page.
Posted by Miss Ladybug at 7:45 PM 3 comments:

More than two years ago, I found out about LCPL Nicholas S. Perez. Since then, I had the honor of meeting his family - his mother and father, his sister, and the nephew I don't think he ever met (I'm not sure how old little Nicholas is) - at an event for Wounded Warriors hosted by the local American Legion. More recently, I found myself once again subbing at the school named in his honor.

When I first found myself at the school, it had opened its doors only seven months before. It is in the middle of its fourth year in operation. Those children who went there the first year as fifth graders aren't even in high school yet. However, it's been there long enough to expand the memorial to Nicholas' life found in the display case in the lobby: 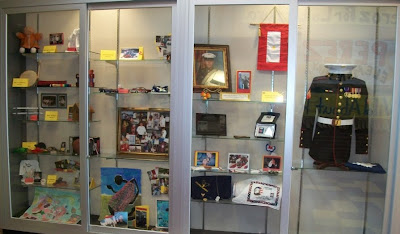 If you look closely, you'll see a Soldiers' Angels fleece blanket, pin, coin and dogtag. You'll also see items from throughout his life: his artwork, his toys, photos, and other mementos. There is also a Gold Star Flag. I also learned that the school remembers Nicholas on the anniversary of his death, with Nicholas Perez Day. I hoped to have a sub assignment on this past September 3rd to observe these remembrances, but I wasn't that lucky.

Thankfully, not all our service members make the same sacrifice as LCPL Perez. But, even if they haven't given the ultimate in service to our nation, many of those who earn a Purple Heart face great struggles to find their new normal. Carren, the amazing wife of Project Valour-IT inspiration Major Charles Ziegenfuss, shares her perspective on what a voice-activated laptop can do for a Wounded Warrior:

Not only was Chuck able to blog with his new laptop and voice-activated software, I was able to relax a little bit more. Instead of trying to figure how to get Chuck some sort of outlet, I knew he had one. Instead of going to the Mologne House every night, wondering how Chuck will manage throughout the night, I knew he had an outlet. Instead of feeling guilty as hell when I went somewhere without him (for ME time), I knew Chuck had his connection to the outside world.

The laptop and software were truly a gift that can not be put into words. Even after Chuck was initially discharged from Walter Reed, we returned MANY times for subsequent surgeries. His Valour-IT laptop and software were always there for him, especially when he couldn't type with his hand(s). I could go on all day about how amazing this program is...

Help support this astounding program. Please click on the donation button in the upper right-hand corner of this page.
Posted by Miss Ladybug at 1:21 AM 1 comment:

Today is Soldiers' Angels' Fourth Annual Day of the Deployed:

Proclamation Day of the Deployed October 26

WHEREAS, this nation is kept strong and free by the loyal citizens who preserve our precious heritage through their positives declaration and actions; and

WHEREAS, our deployed service members have courageously answered their nation’s call to service by defending our freedoms on foreign lands; and

WHEREAS, Americans are encouraged to reaffirm their patriotism and allegiance to our flag and country, and honor the brave men and women currently deployed to protect and preserve our way of life; and

WHEREAS, since 2006 Soldiers' Angels has honored our deployed heroes with a day set aside in recognition of their hard work, dedication and commitment to the United States of America; and

NOW, THEREFORE, Soldiers’ Angels hereby proclaim October 26 as DAY OF THE DEPLOYED throughout the United States of America and where ever our service members are serving.

Today also marks the beginning of the annual Soldiers' Angels Valour-IT Fundraiser. In previous years, I'd decided to join the Army Team, since my father served nearly 27 years. This year, Chuck Ziegenfuss of From My Position: On the Way invited me to be join him on Team Army, but Cassandra and Carrie of Villainous Company beat him to the punch, inviting me to be on the Marine Team with them. Anyway, what Chuck said in his email asking bloggers to join the Army Team really struck me:

There's nothing in this for me. I gain nothing here. But trust me, one of the best days in my life was the few days after I'd died--twice--then came back and met the Angels, Then saw my wife, and finally when I was given back the ability to use a computer--even though I couldn't [use] my hands.

Another in my list of "Best Days" is the day I got to give a kid--an 18 year old kid who'd lost his hands--a laptop that he could use with his voice. The look on his face was priceless when I gave him the laptop--like I was a special kind of stupid and he didn't have a pencil to stick in his teeth. Then I put the headset on him, and showed him how he could train the computer to use his voice to do EVERYTHING he used to do with a computer. Minutes later, he was reading his email, then chatting with his buddies back in Iraq. I left a soldiers angels coin with him, and my card, and quietly walked away. That day ranks with the Marriage and birth of my children as best days in life. It ranks as the best day I've ever had in 17 years of service. And I had that same experience three times that day.

Giving that laptop to those soldiers was amazing. If I could, I'd spend every day doing it. My hope is to raise as much awareness for this as we can, so that we can make sure every wounded servicemember who has lost the use of their hands and eyes, can get one of these machines, and not have to be placed on a "waiting list."

The goal I want to raise for all services is $1 Million. That's more than one thousand laptops, That will give us the ability to meet every need we currently have, and should help us (god willing) have enough to last throughout the year. Injuries we see today take arms and legs and eyes. Taking away eyes and arms isn't something we can fix, but we do have the opportunity here to give the men and women who've lost the use of theirs the technology to help them get some function of normality back in their lives.

While we are having a little friendly competition between the four teams, representing the Marine Corps, the Army, the Air Force, and the Navy, the real goal is raising the money to support our Wounded Warriors.

The experience of Major Chuck Ziegenfuss, a partner in the project who suffered serious hand wounds while serving in , illustrates how important these laptops and other technologies can be to a wounded service member's recovery.

I realize money is tight for a lot of folks. I feel that pinch myself, so I've worked at finding creative ways to contribute, which I will be sharing a little later, once the fundraiser competition gets started. If you are able, please click on the Valour-IT Fundraiser (which officially run through Veterans Day, November 11th) link in the top right corner to make whatever donation you can make. If you prefer to mail your donation, please send it - along with the indication of which team (the MARINES!) you wish to support, and that it is for the Valour-IT fundraiser - to: