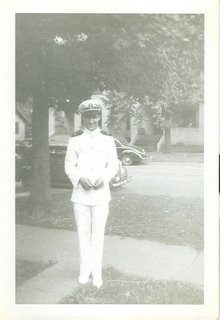 When I was out at my Grandma's house for Thanksgiving dinner, I was helping to decorate for Christmas. It's become a tradition for us female grandchildren to do this, since Grandma can't do it herself (she has been wheelchair bound from polio since my mother was a girl). In looking for something (can't remember what), I found a box full of old pictures. I asked Grandma if I could take it, to scan them all, and I would bring the box back when I was done. Well, I only got around to going through the box today (and still have much to scan). In addition to photos, I found some of Grandpa's high school term papers (one on the 1940 election, another on wrestling, and a third on social security - should make for interesting reading...), as well as some letters from him while he was in flight school, and once he was commissioned in the United States Navy.

From going through this box, and the items it contained, I learned that my grandfather went by the nickname "Shorty", and that he was captain of his high school wrestling team. He graduated high school in 1941 and was only 19 when he was accepted by the Navy as an aviation cadet.

Of the letters I found, I liked this one best:

I got your letter today and it makes me feel pretty good. This will be short but I’m supposed to muster for chow in a little while.

I’ve finally finished my regular scheduled flying so all I have left that I have to do is fly three more hours of night flight. I have one hour of dual and one of solo to my credit in night flying but we get 4 hours of solo night flying so I have the 3 hours left. It’s quite an experience to fly at night for the first time but I like it.

It’s getting along about to the time when I have to decide if I want to stay in the Navy Air Corps or transfer to the Marines. In the Navy I’d probably have to fly off of carriers (if I get a “fighter plane” like I’d like to) while in the Marines I’d probably be land based, which appeals to me quite a bit. They can sink a carrier but I never heard of that happening to a land base. See what I mean. It doesn’t really make any difference to me though so if you’ve got any suggestions or preferences as to which I should try for – let me know. Whether it’s one of the other the rest of my training will still last the same length of time and I’ll be trained at the same place whichever I choose.

It’s time to muster and since I’m the platoon leader I have to be there so I’ll close and wait for an answer to this.

As far as Christmas presents go – send a little list to me with suggestions for you – Mother – Helen & Doug & Verna, Ken and Kenneth Alan. As for myself I don’t know yet what to suggest.

Grandpa did stay Navy. I also have a photocopy of his combat diary. He was awarded 3 Air Medals. He was sent to the Pacific Theater and was assigned to both the USS Essex (CV-9) and the USS Yorktown (CV-10) in 1945. Unfortunately, I never talked to Grandpa about his time in the Navy during WWII. I don't know if he really talked to anyone about it, but I was a girl, we were away in Germany much of my growing up, and he passed away my sophomore year of college. It will be interesting to talk to Grandma about what it is I discovered in that old box...
Posted by Miss Ladybug at 10:53 PM 1 comment:

I started work on my Masters in June 2005. I wouldn't have been able to finish it so quickly if not for my parents. It was tough at times, but I had my goal in mind, and I was determined to meet it. So, after 19 months, 12 classes and student teaching, I'm done.

My dad, who became a teacher after retiring from the Army, had advised it was best to student teach in the fall. Doing so would allow for more time to secure a teaching position for the next school year, while allowing for gainful employment through substitute teaching. I tell you what - those applications for teaching positions are much more complicated than for any other job I've ever applied for.

I have a particular district in mind for where I would like to teach, but I'll just have to wait and see how things turn out. I'm better off than some of my fellow graduates, since I will have the freedom to relocate for the right job - I'm not tied to the district where I currently live. I don't have a spouse, or a lease or a house to sell. As I continue to submit applications, I'm sure I'll post an update when I have found a place to teach. I might get lucky and find a position to begin in January, but more likely, it will be later in the spring when I find something for next fall.
Posted by Miss Ladybug at 10:05 PM 2 comments: