As I have mentioned before, my grandfather was a Naval Aviator in the Pacific during World War II. Recently, my parents found Grandpa's yearbook from back then. The binding is fragile, so I need to be careful handling it. I will slowly work through scanning the whole thing. Here's a start: 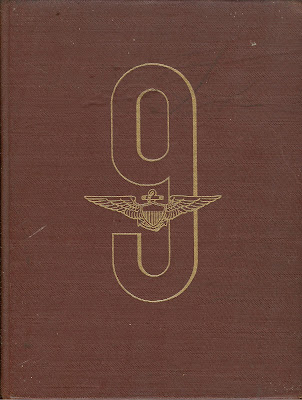 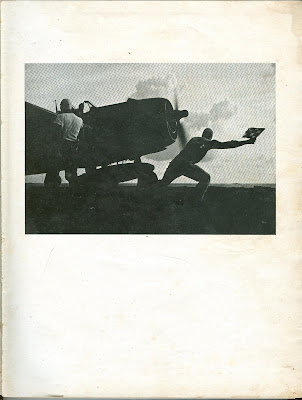 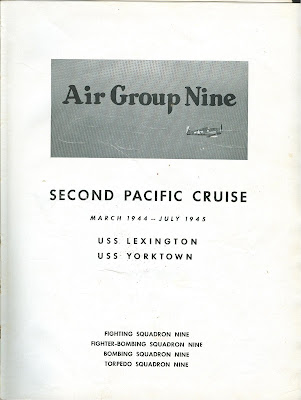 I've been lucky enough to tour both the Lexington, in Corpus Christi, Texas, and the Yorktown, at Patriot's Point, South Carolina, both carriers on which Grandpa served.

Tonight, though, I'll stop with the dedication pages: 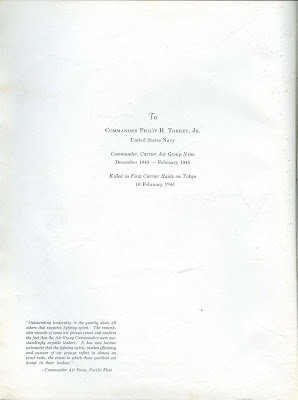 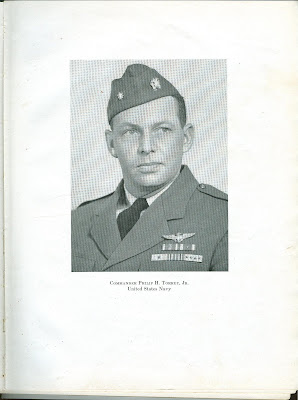 Killed in First Carrier Raids on Tokyo
16 February 1944
"Outstanding leadership is the quality above all others that inspires fighting spirit. The remarkable records of some air groups reveal and confirm the fact that the Air Group Commanders were outstandingly capable leaders. It has now become axiomatic that the fighting spirit, combat efficiency and success of air groups reflect in almost an exact ratio, the extent to which those qualities are found in their leaders"
-Commander Air Force, Pacific Fleet
Commander Philip H. Torrey, Jr., United States Navy:

*TORREY, PHILIP H., JR.
Synopsis:
The President of the United States takes pride in presenting the Navy Cross (Posthumously) to Philip H. Torrey, Jr., Lieutenant Commander, U.S. Navy, for extraordinary heroism in operations against the enemy while serving as Pilot of a carrier-based Navy Plane and Commander of Air Group NINE (AG-9), embarked from the U.S.S. ESSEX (CV-9), in action on 16 and 17 February 1944, while deployed over Truk in the Caroline Islands. His outstanding courage and determined skill were at all times inspiring and in keeping with the highest traditions of the United States Naval Service.
Born: April 25, 1913 at Washington, D.C.
Home Town: Long Beach, California

Fair and Balanced? You Decide!!!

From an email I sent to a work colleague...

Here is a great example of why I get a great deal of my news from The Blaze, which is a fairly new website sponsored by Glenn Beck's Mercury Productions.

Have you heard the latest on the NPR funding controversy? Including some undercover video that appears to be very damning to some top execs? There has been one person fired and another person has resigned as a direct result of the video. Naturally, conservatives and Tea Party members were incensed and are currently organizing to pull NPR's federal funding. However, when The Blaze first reported this story, they questioned the journalism methods and raised some interesting questions. They then went to the trouble to get the raw footage of the video and followed up with this report and analysis: http://www.theblaze.com/stories/does-raw-video-of-npr-expose-reveal-questionable-editing-tactics/ (it includes a link to the first story they posted).

This is not a news source that is going to gleefully jump on the liberal-bashing bandwagon, regardless of what actually happened. If a conservative does something slimy, unethical, etc., they are not going to ignore it, excuse it or try to cover it up. And if they feel that someone on the conservative side has perhaps engaged in some questionable ethics in securing or airing/broadcasting/reporting an important story, they are going to talk about that! Their motto comes from Glenn: "The Truth has no agenda."

Perhaps you remember the whole Shirley Sherrod issue? Well, as many were pushing to have her fired, Glenn was cautioning his viewers, saying "we don't have the whole story - it looks like her comments were taken out of context." In the end, she was fired and he was absolutely right - and eventually apologies were issued, and she got her job back. But not before people actually blamed Glenn and Fox news for her being fired. She was fired before the story ever hit the airwaves! And neither jumped on the "Shirley Sherrod is racist and should be fired" bandwagon...

And lastly, I don't know if you are familiar with the voter intimidation case involving the New Black Panther Party in Philly. This case has been largely ignored by our Attorney General, and there are hearings concerning this case going on right now (the AG has been accused of ignoring any voter intimidation cases where the defendant is not white). AG Eric Holder made some comments that have been damned by many on the conservative side. At first, Glenn Beck was very critical (on his radio show) of what could be considered inappropriate comments. But when he heard the audio of the hearing, he realized that he may have misunderstood. He decided not to go ahead with the planned TV segment and then apologized to Holder the next day on his radio show. http://www.theblaze.com/stories/beck-rethinks-his-take-on-holders-my-people-comment/

He said, when there is doubt, we'll give him a pass on that. And that matches up with my philosophy of giving people the benefit of the doubt when it makes sense to do so. Glenn reminds me not to just jump on the liberal-bashing bandwagon, but to think critically about different stories - and to do my own research. As he often says, he is NOT a journalist, but an opinion person. His news site, The Blaze is journalism - with a debate sort of twist. You'll see all types in the comments section. Some real jerks and some normal, run-of-the mill conservatives. Takes all types to make a world! And of course, you'll see the same people over and over commenting. I'm like "why do you have all this time to comment back and forth, people? Don't you have jobs?!"

Anyway, just thought I'd share that with you. I'm very passionate about defending Glenn Beck, and I feel I have good reason. And I although I do not go looking for liberal blogs, I do trust that I am getting news from a wide variety - and from sources who honestly try to get the whole story, even when it reflects poorly on conservatives. I especially trust Michelle Malkin, Stephen Green, Glenn Beck and of course The Blaze. I have seen many issues on all four where they are willing to a) criticize conservatives b) present facts that reflect poorly on a conservative or the conservatives as a group c) do some research before they start pointing fingers at liberals and d) apologize and correct themselves when they have made an error. And they do NOT bury the apology or correction on "page 10"!!!!
Posted by South Park Diva at 9:22 PM No comments:

Another exchange concerning unions - this one on Facebook. I posted this link to stand with Governor Scott Walker: http://www.timpawlenty.com/stand-with-governor-scott-walker. I had also previously posted about the whole private versus public union conundrum.

To which an old HS replied: "oh yeah they are also entitled to earn a living wage which unions actually got workers earlier in the last century. if people working for private industry didn't have collective bargaining, do you really believe that big companies would actually pay a fair wage? as far as state workers go when was the last time anyone complained that teachers were over paid? without collective bargaining, they'd be paid a lot less.
as for the situation in WI the union agreed to an 8 percent cut in salary already. the governor doesn't want to give up anything. government that doesn't compromise is a dictatorship and in the U.S. wont last long especially in a state that has left leaning tendancies until recently."

To which I replied:

"My post was concerning public unions. Private unions are a different matter. Remember that when a public union goes to the bargaining table, they are basically bargaining with themselves with YOUR money! Politicians know that union money helps to win elections. So it is in their interest to keep unions happy. So when the government sits down with public unions, they are bargaining with taxpayer money - and they don't necessarily care about protecting the taxpayer, so much as protecting their own interests and getting re-elected. Unions know this. Politicians know this. Unfortunately, the taxpayers are getting duped far too often. Walker wants to end this strangle hold that public unions have on the taxpayer's wallet by taking away some (not all) of their collective bargaining rights. Basically, he only wants them to be able to negotiate salary, but not the massive pension and insurance packages that are bankrupting the state. Even FDR, a very progressive president, understood that public unions were a very bad idea.

Private unions definitely serve a purpose to combat dishonesty and greed in private industry, but they can still cause trouble in the long run. Look at our auto industry. At least some of GM's problems stemmed from unions. Remember that collective bargaining rewards people who do not want to work their hardest, perform their best and produce results. When your wages are decided in collective bargaining incentives, including raises, where is the incentive to work hard? Why should I bust my hiny to produce the best results, if my raise/bonus is already assured. My husband works for a company that is non-union. His raise is directly related to two things - first, how well does he do his job and second, how well the company is doing over all. The company will not reward him for crappy work and they will also not give out raises that they cannot afford. It's that simple. And the company is still in business after many, many decades. But what happens to a unionized company who has collectively bargained for raises at a certain percentage, but then the company has a bad year or two years? And they still have to give out larger raises (that are NOT based on performance), regardless of the fact that the company is suffering. So what do they do? Probably either lay off workers or raise prices. And raising prices can just hurt business more...

Unions have definitely served an important purpose. But when people aren't given a choice about joining, or when the union bosses admittedly don't actually care about the workers, but are more interested in creating some kind of revolution, we all suffer for it.

And last but not least, the government is under NO obligation to compromise with the union. The elected officials can pass this law if they have the majority, and in this case they do. Elections have consequences, and the consequences of electing a conservative majority into Wisconsin, is that the governor is not obliged to compromise in this legislation, as long as it does not go against the WI or US Constitution. A case in point can be seen in the massive healthcare bill that was passed last year around this time. Although polls showed that 60% of Americans were against the bill, Democrats rammed it through. There was no compromise with Republicans, because THEY DIDN'T HAVE TO. They had the majority, and that's how it goes. This is not a dictatorship. This is the consequences of elections. Period. And you will notice that Republicans did not abandon their posts in an effort to stall or kill the bill. Conservatives did not sit inside the capitol building chanting profanities and beating drums all day and night. We took our lumps and moved on. And now that conservatives have a majority in the House, they are attempting to legally reverse the decision made last year. That is how our law works. If the party in complete power does not compromise, that is not a dictatorship. That is partisan politics. And the people will have the chance to voice their feelings at the next election. That's how our REPUBLIC works. We are a Constitutional Republic."
Posted by South Park Diva at 7:25 PM No comments: