Two years ago today, 1LT Kile Grant West was killed in the line of duty in Abu Sayda, Iraq. I was privileged to be able to attend his funeral on June 9, 2007. I have come to be acquainted with Kile's mother. She shared with me photos of the new field house named in his honor at his high school alma mater. She has also shared about the memorial portrait painted for her by Texas artist Phil Taylor. I do my best to stop by to see Kile any time I find myself up around Fort Hood. The last time, I was able to introduce him to a friend, so maybe one more person might be stopping by from time to time.

I remember.
Posted by Miss Ladybug at 12:00 AM No comments:

I subbed again on Monday, in a fourth grade class for a language arts teacher. I took the opportunity to look over the books on the shelf and found The Night Crossing by Karen Ackerman, illustrated by Elizabeth Sayles. On the back cover of this short (56 page) book, which is recommended for ages 7 to 9, are two endorsements:

This is an excellent fictional introduction to the Holocaust....Ackerman's writing is clear and direct.
~School Library Journal

Realistically child-centered.
~The Bulletin of the Center for Children's Books

It is a simple enough story. It is 1938. Clara is a little Jewish girl living in Innsbruck, Austria. The Nazis have taken control and things are getting bad: they must wear yellow stars on their clothes; they are forbidden "from celebrating the Sabbath or going to the synagogue"; some people have been dragged away, never to be heard from again.

Clara's father, Albert, tells his wife, Helen, they must leave while they still can. Clara and her older sister, Marta, help their father find things around their home that can be sold to get the money they will need to escape. They can only bring with them what they can carry.

The family will make a night crossing, just like Clara's grandmother did when she was a little girl, when the Jews in Russia were being persecuted. And, the dolls Grandma carried with her, Gittel and Lotte, will make another night crossing, this time with Clara.

The journey is a dangerous one. They must travel by night, by foot. They must hide during the day. They must avoid being seen by patrols of Nazi soldiers. They must pretend to be Swiss citizens who have just been visiting family in Austria.

For children unfamiliar with this period in history, this book, as the School Library Journal says, is a good introduction. It is a quick read and touches on the dangers Jews faces during the Holocaust. The epilogue isn't graphic about it, but does mention "horrors of the Nazi concentration camps" being reported in the papers, sometimes accompanied by pictures from English, American and Soviet photographers; also "Clara and Marta began to understand what had truly happened to the people like Mr. Duessel, the kosher baker who'd disappeared." They girls also come to understand their father made the right decision. They had family who chose to stay behind that were never seen again.
Posted by Miss Ladybug at 10:04 PM 1 comment:

It has been 19 weeks now since I first weighed in to see where I was starting in my quest to reach my ideal weight. I stepped on the scale this morning, and I have passed a significant milestone. I now weigh 199 pounds, even. It's the first time in years that I have weighed less than 200 pounds! I have lost a total of 31.4 pounds since I started this journey.

Another big deal for me is being able to shop for clothes in "regular" stores. I have bought a summer dress and a couple of skirts and tops at Old Navy (something I couldn't have done when I started all this), and I've bought some tanks tops for the warmer weather in the regular department in JC Penney. Thursday morning, I went through a couple of boxes of old clothes that I had recently taken out of storage, and I am able to fit back into most of it - cute skirts, a few pairs of jeans, and a variety of tops. And, I've also been able to put lots of stuff into a big, black trash bag to be taken to Goodwill - I think I'm working on bag number 4. It was nice, a few weeks ago, to put on a pair of shorts from last summer and have the waistband fall down to my hips.

Also, I went to David's Bridal Wednesday evening on my way home from work. I needed to get some information about how far in advance I'm going to need to order my bridesmaid dress for my sister's wedding. I've decided to go with a short dress, and with the color my sister chose, that only gives me four dresses to pick from. I was able to try on a smaller size than the first time we all went to the dress shop with my sister, when she bought her dress. I've narrowed it down to two dresses - my first choice, which is the same dress my other sister chose, and a "runner-up" dress, but it was also good to be able to say "I don't like either of those". Both the dresses I'm considering will take 12 weeks to come in, and then I need to allow 4-6 weeks for them to do any needed alterations. I did explain that I am in the process of losing weight, and that I had lost about 30 pounds since the beginning of the year. They said that - if I will be continuing to lose weight - when I order my dress, I should order one size smaller than what fits at that point, and then they can take it in up to two dress sizes from there. Eighteen weeks from the wedding is July 4th, but I don't want to cut it that close, so I have decided I'll order my dress on/around June 20. That gives me five weeks more...

I will admit, I don't always get the exercise in, but when that happens, I also make adjustments to what it is I consume. I still eat fast food, but I try to be smart about my choices. I love Sonic, but that's about one of the worse choices I could make, so I don't go there. And, I'll often order the kid's meal or order items a la carte to keep portion size under control. I've been able to keep my sweet tooth from getting out of hand. I bought a box of Twinkies several weeks ago because I had a craving for a real one, and I'm happy to say I still have several of them left. I also still have some of my Easter candy left, too. I will have the occasional soda (I pick up some of those 8-ounce cans), if I can spare the calories. Since I've been seeing steady progress (there has still only been that one week when I didn't lose weight), it's been a lot easier to think "do you want that *soda, candy, fast food*, or do you want to keep losing weight?" to keep myself from making poor choices. So far, so good.
Posted by Miss Ladybug at 1:12 PM 13 comments:

Help a Wounded Marine get a new home

In my inbox Wednesday afternoon:

I hope that you are all doing well. I know it’s been a while since we’ve asked for help or support for our hero, but there has been a new flurry of activity in the Emery camp recently!

An incredible organization, “Homes for our Troops” is building an ADAPTIVE home for DJ! This is a wonderful organization and an incredible opportunity for DJ and Carlee! Since 2004 this nonprofit organization has built 40 specially adapted homes for severely injured veterans who have returned from service in Iraq and Afghanistan. These homes, and DJ’s home, will be built at NO COST to the veteran, but only with our help!!!! Homes for our Troops is looking for foundation grants, corporate sponsors and volunteers to make this project possible! Fundraisers are also needed! DJ’s dream has been to build a home for himself and Carlee that includes a therapy room and is fully accessible to him, I am so excited that this dream of his is coming true! Below is the link to DJ’s page on the Homes for our Troops website where you can donate or sign up to volunteer. There will also be a registration day for interested trades-people and volunteers to sign up to help build the home for DJ from 1-8 p.m. tomorrow (Thursday 5/7/09) at the Ramada Conference Center at 1450 S. Atherton St. in State College. There will also be a presentation given at 6:30 by project manager Rick Goyette. DJ will be participating in the presentation!

Please, please, PLEASE pass this email along to anyone and EVERYONE you know. It is going to take A LOT of wonderful people stepping forward to make this the success that DJ deserves!!!!

As always, thank you all so much for all of your help and support!!!!
Posted by Miss Ladybug at 1:09 AM No comments: 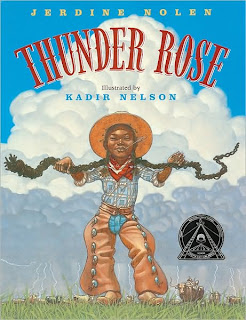 When I was working on my Masters, I had to design several "units". One of them was part of the requirements for student teaching, and had to relate directly to the grade level I was teaching. So, I settled on a unit centered around Tall Tales. There are the various traditional tall tales: Paul Bunyan, John Henry, Pecos Bill. But, I also went looking to see if I could find something new. I found that something new in Thunder Rose by Jerdine Nolen and illustrated by Kadir Nelson. The book is recommended for children 5 to 8 years old.

Thunder Rose takes elements from many of those traditional tall tales, but has other elements all its own. Rose sits up and talks immediately after her birth to freed slaves in the post-Civil War American West. Born the night of a storm, she grabs hold of a bolt of lightening, placing upon her shoulder after she "rolled it into a ball." The next morning, her mother's milk isn't enough, so she takes to drinking directly from the family's cow...

As a two-year-old, she takes some scrap iron and fashioned into a big thunderbolt and named it Cole. "Wherever she went, Cole was always by her side." Of course, she performs a myriad of amazing feats growing up, to include wrestling a big Longhorn bull to stop the stampeding herd before it overran the family farm when she was twelve, after which she tamed him by humming her song to him. She decided to name him "Tater" on account of potatoes being his favorite vegetable. She also invented "Barbara's Wire" while building a pen for all those stampeded Longhorns: she found that "little twisty pattern seemed to make the baby laugh"... She captures a gang of cattle rustlers... She lassos a cloud to make it rain... She calms a pair of tornadoes with her song... All this and still a girl!

Thunder Rose is a cute story, and I really like the illustrations. The author's note at the front of the book gives a little explanation on what was behind the writing of this tall tale: an old desire to add to American folklore and wanting to share "a little-known part of American history" of how many freed slaves went West, how "these bold, brave and adventurous spirits heroically took the opportunity to set themselves down in those wide-open spaces to live free."

Thunder Rose is also a 2004 Coretta Scott King Honor Book for illustrator Kadir Nelson. "The Coretta Scott King Awards are presented annually by the American Library Association to honor African-American authors and illustrators who create outstanding books for children and young adults."
Posted by Miss Ladybug at 12:16 AM 1 comment: