In trying to research names for the next section of my grandfather's Carrier Air Group Nine yearbook from World War II, I came across a February 1948 issue of Naval Aviation News that has an article on Torpedo Squadron Nine. It's on pages 10 & 11 of the PDF. I look forward to taking the time to read the whole thing.
Posted by Miss Ladybug at 11:11 PM 1 comment:

I didn't join a team this year for the competition. I've taken on other responsibilities that prevent me from being able to post daily for during the campaign. But, that doesn't mean I won't help spread the word. Soldiers' Angels' goal is $100,000 over the two-weeks from July 1 to July 14. If you aren't familiar with Project Valour-IT, here's what Chuck has to say:

In 2005, I was wounded. For some months, I was unable to use my hands. They were simply too badly damaged from the blast, and the surgeries to make them usable again left me unable to do anything for myself.

Then came Soldier's Angels, who gave me a laptop, and paired it with special software that allowed me to control the computer, using only my voice! Imagine, being able to do anything you can do with a mouse and keyboard, using just your voice. For me, it allowed me to do one thing, that I could do before I was wounded.

That one thing--when everything: feeding, cleaning, scratching, everything had to be done for me--that one thing I could do for myself allowed me to connect to my soldiers, friends, and family. That one thing... that one thing began a long road to recovery. It gave me hope; that I could learn to do other things like I did before.

That one thing is only possible if people like you care enough to help. We have provided thousands of these systems since 2005, but the needs for these systems is still increasing. I visit military medical facilities and meet with wounded troops, and know that there are ways to help them... and right now, I have to tell them to wait because we need funding.

Should our wounded have to wait for something that can help them heal, take their mind off their pain, or bring them a little sense of self?

Please help us raise $100,000 between July 1-14; to keep us in the business of providing for our wounded. It seems like a lot of money, but every single dollar helps. Every dollar donated goes to the troops. None of the VALOUR-IT donation goes to administrative or other costs. You'd be hard pressed to find any charity that does that, but it was a stipulation I made when we set it up. That number seems huge, insurmountable. But you know how you eat an Elephant? One bite at a time. Give what you can, please. I know times are tough. Times were pretty tough for me, too, and are pretty tough for young men and women learning how to use prosthesis, getting skin grafts, having wounds washed out.

Donate if you can, please share the message with others. Get your friends to give what they can. Write about it on Facebook and twitter. Call in to a radio or TV show. Spread the word. Spread the love. Spread the hope.

Posted by Miss Ladybug at 11:06 PM No comments:

When I first posted about finding my grandfather's yearbook from his time with Carrier Air Group Nine during World War II, I soon had a comment from artist Scott Nelson, looking for some guidance about the markings of the aircraft assigned to the USS Yorktown. With a little help from BillT's comments on that same post, Scott got the information he needed to complete his project. Last weekend, I received an email letting me know the painting was finished:

Hi,
I had promised to get the photo of the painting to you, you can post it you want. The painting was a surprize for Stew Bass at his 90th BD party held at the Air Museum, Fargo ND. Stew signed the painting. The second pict. is Stew Bass and me.

The painting shows half of Torpedo 9, 7 planes (the other half, 6 planes were attacking the Yamato in the upper right of the painting). Stew's flight attacked the cruiser Yahagi, coming in at a pie shaped formation, altitude around 800 feet, releasing the torpedoes around 1500 yards from the ship. This was the high speed, high altitude, torpedo attack developed by the Navy. 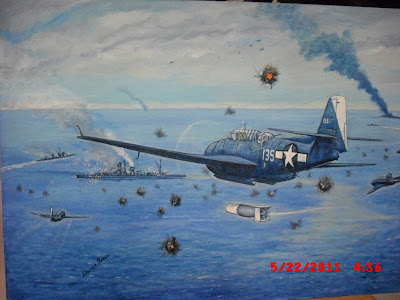 With Stew and Scott: 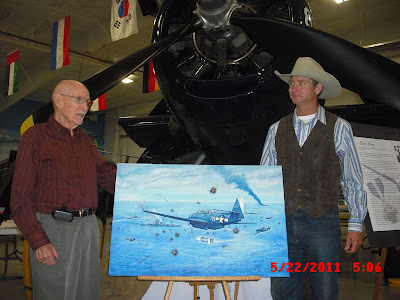 I emailed back to ask if the piece had a title yet. Not officially, but he explained:

...have thought about the title "THE LAST FISH". Fish refers to what the Navy flyers called the torpedo. One of the planes from Torpedo Nine dropped the last arial torpedo ever used against enemy shipping. (could have been Stew?)
Scott

I haven't gotten to Stew's section in the yearbook yet, but I promise I haven't given up on this project. It will just take a bit of time, considering I want to research the names of the men in the book, to share whatever it is that can be shared about who they are/were. Would that there were more hours in the day ;-)
Posted by Miss Ladybug at 12:32 AM 3 comments: