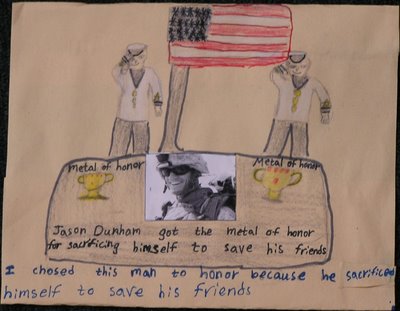 One of the things I like best about teaching is educating children about social studies topics. Recently, I presented a lesson focusing on presidential memorials. As an extension, students were asked to select a person they would like to honor, and draw a memorial for that person.

My cooperating teacher is the wife of a retired Army officer, so she also stresses an appreciation for the sacrifices made by our military. After it was announced another Congressional Medal of Honor would be awarded to a service member from the Global War on Terror, she mentioned it in class during the morning announcements time, which includes the Pledge of Allegiance. Being a frequent reader of milblogs, I knew the name of the newest recipient, and what he had done to earn it. I shared that information with the class.

So, back to the lesson on memorials: one student came up to me and asked for ideas about who to honor. I suggested presidents, police officers, firefighters, and the military. This little boy, who says he wants to be a soldier when he grows up, liked the suggestion of the military, and asked about the most recent person to be selected for the Congressional Medal of Honor. I hopped online and looked up and printed some information on Corporal Jason Dunham. Another student also liked that idea, so I printed out some additional information for the second student. What this second student drew was very touching, I thought. I wanted to share it with my friends in the military, but I first had to request permission from his parents to do so. I received that permission today. So, above is a third-grader's memorial to Corporal Jason Dunham...

In addition to today being the 234th birthday of the United States Marine Corps, today is also what would have been Marine Corporal Jason Dunham's 28th birthday. Give Jason and the Marine Corps a present, no matter how small, by clicking on the Soldiers' Angels' Project Valour-IT donation button in the top right corner. While Team Marines may only be - as of this writing - less than $2000 from the individual team goal of $35,000, overall, we still have a way to go to reach the total goal of $140,000, and the current fundraiser will end tomorrow, Veterans Day 2009. Help us work towards that goal.
Posted by Miss Ladybug at 11:25 AM